Home > Landlords & Tenants > Eviction When Tenants are Not in Arrears

Eviction When Tenants are Not in Arrears 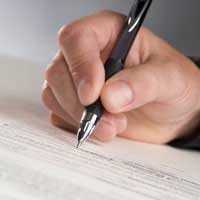 Most tenancies today are known as Assured Shorthold Tenancies. Depending on the circumstances, a landlord can bring this kind of tenancy to an end at any time, even during the so-called fixed term. However, before a landlord can evict a tenant he must first serve notice on the tenant requesting that they leave the property. If the tenant does not leave voluntarily the landlord will have to go to court and get a possession order before he can evict the tenant.

There are two different types of notices that entitle a landlord to seek possession of a rented property when there is no unpaid rent owed by the tenant.

A section 21 Notice is a written notice which asks a tenant to leave the rented property. The wording of the notice will differ slightly depending on whether it is sent to the tenant during the initial fixed term, which is commonly six months, or after the fixed term has expired. In essence, this notice gives a tenant two months in which to vacate the property. If the tenant has not left the property at the end of that time the landlord is entitled to take the tenant to court to seek a possession order.

If a possession case is based on a valid Section 21 Notice the judge has no choice but to make a possession order. This will usually allow the landlord to evict the tenant after 14 days. The Judge can only grant longer than this if he is convinced that the tenant will suffer exceptional hardship if they have to leave the property within 14 days. However, when a possession order is made during the fixed term of the tenancy agreement it should not take effect before the end of the fixed term.

Section 8 of the Housing Act 1988 sets out the particular "Grounds" on which a landlord can seek possession. Many of these Grounds do not require a tenant to owe a penny in rent but most of them cannot be relied on during the fixed term of a tenancy. The landlord will usually have to send a Section 8 Notice to the tenant explaining the Grounds on which he is seeking possession and giving the tenant as little as two weeks to leave the property before a court case can be started.

The list below outlines the likeliest Grounds on which a landlord might seek possession when no rent is owed. It sets out whether the judge has any choice about making a possession order and whether possession can be obtained during the fixed term of the tenancy agreement. (For some of the grounds there are additional requirements before a landlord can seek a possession order.)

Housing laws were changed in the 1980s because it was felt that it was too difficult for landlords to evict unwanted tenants. The result today is that a law-abiding tenant who is completely up to date with his rent can find himself facing eviction in a matter of weeks.