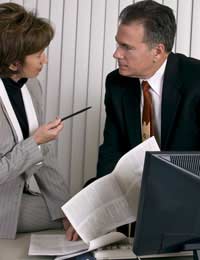 Landlord and tenant hearings are usually held in a judge’s private room: the hearing will be relatively informal and only the parties or their legal representatives will be present. However, some courts hold these hearings in “open court”: the judge and the lawyers may be wearing formal robes and members of the public, or parties from other cases, can be present when the case is heard.

There may be free legal advice at court and an adviser may be available to represent the tenant during the hearing. Otherwise it is very unusual for tenants to have legal representation unless they are receiving help from a local advice centre.

The landlord will usually be represented by a lawyer who will explain the landlord’s entitlement to a possession order. The landlord, or their agent, should be at court to give oral evidence.

The landlord or their agent will take a sworn oath before giving their evidence. Then either the landlord’s legal representative or the judge will ask them questions about the tenancy and the current rent arrears on the property. They should have the original tenancy agreement with them to show the judge. The tenant may be given the opportunity to cross examine the landlord on any points with which they disagree. However, if there is no real dispute about the facts and figures, this rarely happens.

The Tenant’s Chance to Respond

If the judge has the power to make a suspended possession order, this will be the tenant’s chance to make proposals for the clearance of any rent arrears.

One of the most common defences raised is that, due to a defect in the property, the tenant has withheld the rent. Whether or not this constitutes a defence may depend on the landlord’s reason for asking for possession and the wording of the tenancy agreement. Generally a tenant is not entitled to withhold rent. However, this argument may still lead a judge to adjourn the case so that both sides can provide more evidence.

If the judge is happy with the landlord’s case and decides that there is no defence, it is likely that he will make a possession order. The landlord will probably also be asking for some or all of the following:

If the judge is not happy with the landlord’s case, or if he thinks there may be a valid defence, he is likely to adjourn the case for a further hearing.

If any rent arrears have been cleared before the hearing, the landlord will probably ask the judge to adjourn the case indefinitely. It can be revived at a future date if the tenant falls back into arrears.

Costs in Landlord and Tenant Cases

If the judge makes a possession order the tenant will probably have to pay the landlord’s costs. The landlord’s solicitors may have prepared a schedule setting out all the costs incurred in bringing the case to court - these can be in excess of £1000. However, many judges believe that the costs in these cases should be restricted to “fixed costs”. These are set out in the rules which govern county court hearings and currently total less than £300. A tenant is entitled to argue that the landlord should not get more than these fixed costs.

New Rules on Repossession for Tenants of Mortgaged Properties
Share Your Story, Join the Discussion or Seek Advice..
I have been living in my home for 11 years,it is part of a PSL scheme which was new when I was offered the property.......I have been asked to leave ....the landlord wishes to take the property back......there are no rent arrears........I asked the management agents for a six month period to allow me to get myself together ....I work from home as a writer and healer.......they are taking me to court ......the hearing is on the 23rd February......I have written to the court explaining.........it seems there is nothing I can do but go through this process with an eviction to force me to leave.......any advice would be helpful......thankyou.........I live in Edinburgh , Scotland , the housing situation is impossible with long term rentals .....I have been moving in and out of private lets since 1990 after losing my marital home...........the present time there are more individuals seeking accomodation than can be provided for ..........it seems like a hopeless situation.....
sol - 3-Feb-18 @ 11:08 AM
can a section 8 notice be used if itenancy agreement has been altered after signing and is forged by landlord.
fool - 24-Mar-16 @ 2:09 PM
Title:
(never shown)
Firstname:
(never shown)
Surname:
(never shown)
Email:
(never shown)
Nickname:
(shown)
Comment:
Validate: