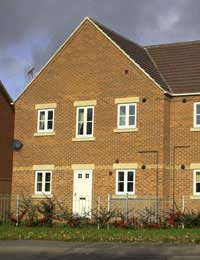 The best investment you can make is in property. The news tells us this. All those property shows on television tell us this. Safe as houses - you cannot go wrong.

The Housing Market in the 1990s

Except, of course you can. As recently as the early 1990s when recession hit, house prices fell and the market stagnated. Many homeowners found themselves unable to pay their mortgage but unwilling to sell because their home was now worth less than the amount they owed their lender. During the 1980s the saying "an English man's home is his castle" had really come to life. The mortgage industry was deregulated and suddenly it seemed as if everyone could get a mortgage - even council properties were being sold to their tenants at discounted prices under the right-to-buy scheme. Homeownership had become a fundamental human right. Even though interest rates were high it was all right because prices just kept going up and up…

The situation today may not be as bad as it was in the early 1990s - the general consensus seems to be that house prices will stagnate rather than crash. However, because lenders had been offering mortgages for up to 95% of a property's value (and even for more than 100% in some cases) there is very little margin for error if prices stop going up.

The problem can be particularly bad with newly built properties which often seem to depreciate almost immediately, much like a new car. A premium may have been paid because a property is brand new and, in a market where prices have stagnated, this premium will not be recovered if the property is sold on. In addition many new properties are built in so-called "up-and-coming" areas which are the first to suffer a drop in prices when the market slows down.

The Effect on Lenders' Behaviour

A fall in house prices will have an impact on the way that lenders deal with borrowers struggling to maintain payments towards their mortgages. If there is plenty of equity, a lender is more likely to be patient because they know that their money can always be recovered by selling the property. However, if the sale of a property is unlikely to cover the mortgage debt, a lender will be much less willing to wait for a borrower's financial circumstances to improve.

Negative Equity and the Courts

If a lender takes a borrower to court to repossess their home and the judge is shown evidence that there is little or no equity in the property he is almost bound to make a 28-day possession order. The reasoning behind this is that, by preventing the lender from immediately enforcing their right to repossess the property, the judge would be increasing the likelihood that the mortgage debt will not be covered by the proceeds of the sale.

What Happens when a Lender Sells a Repossessed Property?

When a property is sold by the lender they are entitled, under the terms and conditions of the mortgage, to recover from the sale proceeds any costs and expenses they have incurred during the sale, in addition to the mortgage debt itself. The lender also has to redeem any other mortgages or charges on the property - any money left over is then returned to the borrower. If at that stage money is still owed on the mortgage the borrower is liable to pay it. The consequence is that borrowers may be left with a substantial debt hanging over their heads for many years to come.