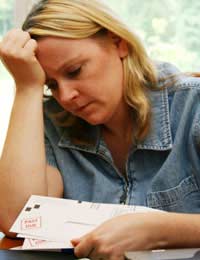 When a mortgage lender starts a mortgage repossession case the defendant borrower will receive a pack from the court which includes a Claim Form, the Particulars of Claim - which sets out the background of the case - and a Defence Form. The Defence Form may be filled in by the defendant to show whether they agree with what has been said by the mortgage lender. There may be minor disagreements between the parties – such as the precise level of the arrears – but the basic grounds on which the mortgage lender brings the case will often be agreed.

In most mortgage repossession cases the Defence Form is used by the borrower to set out their circumstances so that the judge can decide what sort of possession order should be made. The borrower may include such information as their income and expenditure to help the judge decide whether the defendant can afford to make payments towards the mortgage.

Whilst it is helpful if this information is provided in advance of the possession hearing there is no real obligation on the defendant to complete the form. It is very common for borrowers to come to court and provide the relevant information on the day of the hearing.

Mortgage repossession cases where a borrower has a genuine defence to the claim are rare. A real defence tends to be one which disputes the validity of the mortgage or which shows that the mortgage lender was not entitled to bring the case. The types of arguments that may raise a defence to a mortgage repossession case include allegations that the borrower’s signature on the mortgage deed is a forgery or that undue influence was placed on a borrower when they signed the agreement.

It may be difficult to sustain an argument of undue influence where a borrower’s signature was witnessed by a solicitor. Undue influence cases have often involved wives claiming that their husband’s induced them to enter into a mortgage. It is probable that to succeed with such a defence the party arguing it may have to show both that they derived no benefit from the mortgage and that the mortgage lender was aware that there had been undue influence.

When a valid defence is raised to a mortgage repossession claim the case will usually be dealt with in a different – and more costly way – than is usual. The judge may initially give directions for both parties to give further evidence relating to the alleged defence. By doing this the court may be able to establish whether there really is a defence to the claim before too many additional costs are incurred.

If a genuine defence is raised the case may be allocated to a “track” and / or the judge may give further directions for a full defence to be prepared by the defendant and for further evidence to be provided by both parties. The case may then be decided at a trial. If the borrower loses this is likely to result in much higher costs being incurred than in a standard mortgage repossession case – and they will still have to find a way to pay the mortgage arrears.

Even if a case does not end up at a trial, extra costs may still be incurred. Whilst borrowers should feel free to pursue a genuine defence, the time and costs this will involve should be weighed up against the potential value of defending the case.

Talking to a Mortgage Lender's Representative at Court
Share Your Story, Join the Discussion or Seek Advice..
I have defaulted on a mortgage arrangement, I admit, not for the first time. I owe £2500, and have been paying £200 per month. I got confused with accounts last month and I paid £36.00 less, now it appears I have no agreement and they are moving to seek possession. They have advised that they will need my bank statements from the past 3 mnths before going any further with consultaion with myself. I feel this is groosly invasive. I don't care about the income, but how and where I spend my money is personal. How about if I paid porn sites or escorts? can I score through recipients before sending them in?
showbiz - 8-Nov-12 @ 5:35 PM
Does the bank need to produce the original mortgage deed when repossesing a house?
mwoodhouse - 31-Mar-11 @ 3:27 PM
Title:
(never shown)
Firstname:
(never shown)
Surname:
(never shown)
Email:
(never shown)
Nickname:
(shown)
Comment:
Validate: